Sea turtles range extensively across the oceans and play an extremely important role in the marine ecosystems. They help maintain the health of the marine habitat mainly sea grass beds and corals that benefits species such as shrimp, fishes and lobsters – all commercially valuable species. They are also greatly important in terms of the tourism income. In Malaysia, there is not a single tourism poster, brochure or video which does not feature sea turtles. They are viewed as beautiful and majestic reptiles, becoming the main attraction to divers in all top diving locations and hatchery operation sites receives high number of tourist to witness sea turtles laying eggs and releasing hatchlings into the wild.

Sea turtles travel hundreds or even thousand miles from land to sea throughout their lifetime, thus exposing them to countless of threats. Trawl fisheries are considered the number one threat to sea turtles. The Marine Research Foundation (MRF) has been working tirelessly for decades to address the issue by introducing the Turtle Excluder Devices (TEDs). TEDs offer practical low cost solutions allowing catch to be retained while accidental captured sea turtles are ejected from nets. 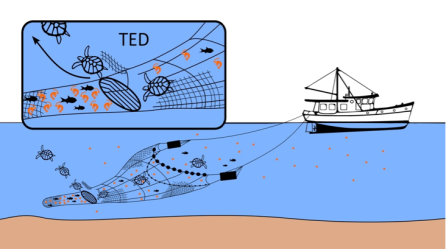 A TED is typically an oval frame with vertical bars that allow shrimp and fish to pass through to the back of the net, while turtles are forced out through an opening covered by a net flap. TEDs improve the quality of the catch, as large objects such as turtles do not crush it, and the reduction of debris in the back of the net saves fuel – a benefit to fishers.

MRF initiated the TEDs Programme in 2007. It began as a volunteer-based initiative, and in 2013, the programme achieved positive success as well as recognition when the Malaysian government made a commitment to develop the project into a nationwide National TEDs programme. Four states along the east cost of Peninsular Malaysia (Terengganu, Kelantan, Pahang and Johor) have fully adopted TEDs since November 2017 and by the year 2022, it will become a full-scale adoption Nationwide!

Sabah will become the fifth State to be fully TED equipped by 2019. With the support from our funders, MRF together with the Department of Fisheries Sabah (DOFS) will be carrying out multiple workshops throughout the next 2 years to all key fishing districts in Sabah. The workshops will include training fishing crews to build, install and repair TEDs, dialogue sessions with fishermen and DOFS, and demonstration at-sea trials (catch comparison with and without TED on shrimp fishing vessels). Our goal is to get as many fishers as possible be ready, knowledgeable and trained in the use of TEDs by this time. 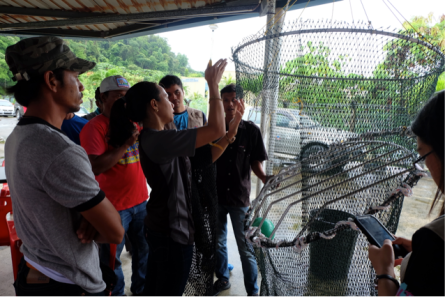 Demonstration and training to build, repair and install TED with fishing crews (Photo courtesy of MRF) 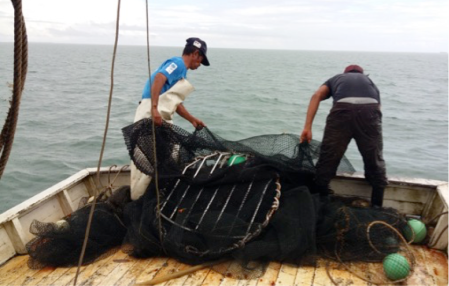 We started the TEDs project in Sabah by training the DOFS Officers. This was essential in developing the necessary skills required to further champion and advocate for TEDs implementation across Sabah. It was the beginning in establishing the Department of Fisheries Sabah ‘TEDs All-Stars Team’! The team will work closely with MRF to conduct training and outreach activities with fisher communities in Sabah and will, gradually, organize and lead training activities in the future!

It has been estimated between 2000 – 4000 sea turtles are killed each year just in Sabah alone from accidental catch in shrimp trawl fishing. We envision, with effective training and in-depth understanding of the TED initiative, we will reduce the number of deaths of the endangered sea turtles in shrimp trawl fishing, while remaining sensitive to the livelihood of the local fisher communities in Sabah.

View all posts by liyanakhalidmrf