Pangolins, also known as scaly anteaters, are extraordinary animals. They do not have teeth so they dig ant nests and termite mounds with their strong claws and swallow them together with tiny stones to help them digest their food. Their bodies are covered with hard overlapping scales and thick bristles that emerge from the scales, which is unique to Asian pangolins. Female pangolins carry their young on the back of their tails. When sleeping or threatened, pangolins curl into a protective ball. Being nocturnal and elusive, these solitary mammals are difficult to study in the wild, thus many mysteries remain about their behavior and habits which hampers conservation efforts. All pangolins species are rare with decreasing in number because of its value mainly in the Chinese traditional medicine and served as exotic meat. Sunda pangolin (Manis javanica), found only in Southeast Asia, is one of the least studied species in the region. There are no detailed studies on the population levels, ecology or life histories of Sunda pangolins.

One of the few people working on this species is Elisa Panjang, a local researcher based in Danau Girang Field Centre (DGFC), Kinabatangan, Sabah, Malaysia. As part of her Ph.D. at Cardiff University, her research is focusing on gathering data on the spatial use, habitat selection and behavior in a fragmented and degraded landscape by using multiple approaches to study the species i.e. sign survey, camera trapping, radio and GPS telemetry as well as survey on local knowledge. During her study, she managed to attach radio and GPS units on three pangolins and able to track them for some time, and recorded interesting behaviour which have never been documented before. Her research on wild Sunda pangolins will provide invaluable information especially to make sure the survival of the species, which is already threatened by illegal wildlife trade. 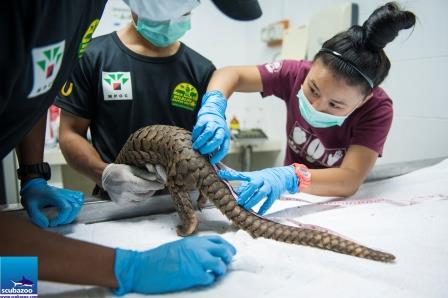 Meanwhile, apart from doing research, Elisa is also focusing on public education and raising awareness. As a Pangolin Conservation Officer at DGFC, she works very close with the local villagers, plantation companies, conservation NGOs, zoos, and media to highlight about pangolin e.g. through public talks and exhibitions to increase awareness especially in Sabah. This year, about a thousand school students from three districts in Sabah learnt about pangolins during World Pangolin Day. Well done Elisa!