Imagine yourself in a supermarket; you grab a pack of cookies and you scan the barcode behind for the price of the cookies. Now, what if we use this concept to study the diet of nectarivorous bats and hence understand their roles in pollination? This is what VC Lim attempted to do for her PhD research in University of Malaya.

The cave nectar bat, Eonycteris spelaea, is one of only three nectarivorous bats present in Peninsular Malaysia. Through its feeding on nectar and pollen, the cave nectar bat pollinates the commercial crops (e.g., durian and petai) and mangrove plants (e.g., Sonneratia alba). Previously, the diet of cave nectar bat in Peninsular Malaysia, Thailand and Cambodia was studied by identifying the pollen grains collected from the faeces and body of the bats based on the physical features of pollen grains. However, these studies failed to identify many of the pollen grains which lack the distinctive physical features for identification.

Therefore, a new method to study the diet of cave nectar bat is necessary for fully understanding the ecological role of the bats. One potential method is to extract many short fragments of plant DNA from the faeces of bats and later match them to DNA reference sequences in a DNA library, consequently provide information on what plants the bats have been feeding on. This method is known as “DNA metabarcoding”, similar to how a supermarket scanner distinguishes consumer products using the black stripes of the Universal Product Code (UPC).

To date, there are no studies which use DNA metabarcoding to examine the diet of nectarivorous bats. Therefore, VC Lim, a PhD candidate in University of Malaya, teamed up with another researcher, Dr John James Wilson from University of South Wales to explore the potential of DNA metabarcoding in dietary study of cave nectar bats. 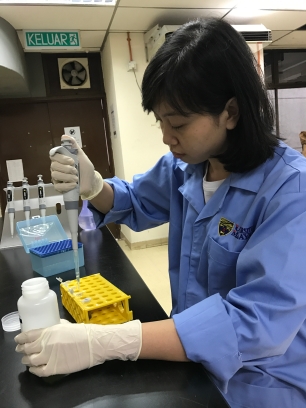 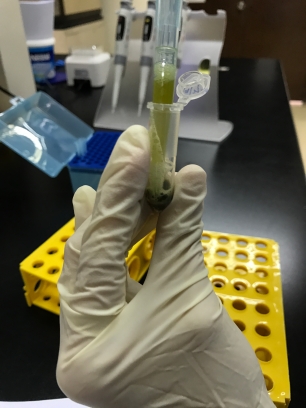 VC Lim is extracting DNA of plants from faeces of the cave nectar bats.

As a result, they discovered 55 plant species have been consumed by the cave nectar bats roosting in Dark Cave Conservation Site, Batu Caves between December 2015 and March 2016. Many of these plant species which were detected from the bat faeces had not been reported by previous studies of cave nectar bat’s diet. 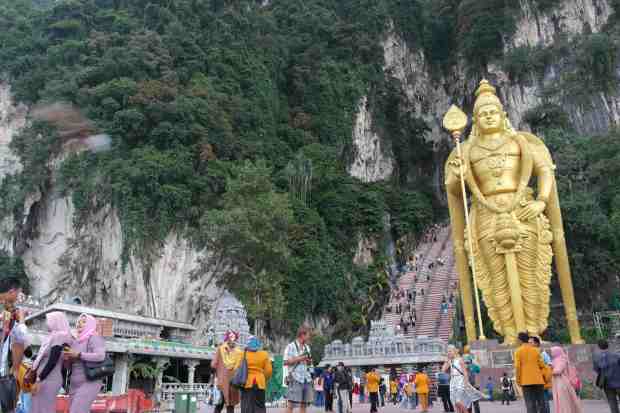 The Dark Cave Conservation Site is one of the caves in Batu Caves and is home to a large colony of cave nectar bats. Batu Caves serves as a temple for Hindu prayers and tourist attraction for its cultural and natural heritage. Photographed by VC Lim.

Several of the detected plants are found only in particular habitats such as mangroves, limestone hill and montane forests. Therefore, it is likely that the cave nectar bats are promoting genetic diversity among the populations of plants by dispersing pollen across different habitats. Commercial crops particularly jackfruits, bananas and water apple were frequently detected in the bat faeces, supporting the view that the cave nectar bats are economically important pollinators of commercial crops.

However, non-native plants, which were introduced to Peninsular Malaysia many years ago, were also detected in the bat faeces. If the cave nectar bats preferentially feed on and potentially pollinate the non-native plants, the pollination and hence reproductive success of native plants may be adversely impacted. Therefore, it is important to consider the origin (i.e., native or non-native) of a plant species before gardening and agricultural activities.

Altogether this study has demonstrated the potential of DNA metabarcoding in studying the diet of nectarivorous bats, and revealed the important ecological and economic roles of cave nectar bats despite roosting in a highly disturbed urban cave.

For more details, check out the published work here!